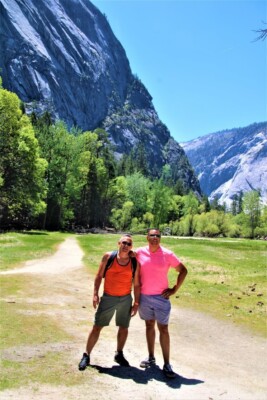 To the Ends of the Earth and Back

Help! I’ve fallen and I can’t get up!

No not me…. my-loving-adoring-stubborn “it-can’t-happen-to-me” husband. Yep, out in the middle of nowhere, in the Yosemite National Forest, on the Mirror lake trail, he decided that he was going to climb a massive boulder so he could get the perfect picture.

If it doesn’t sound like I have much sympathy for him, then let me start at the beginning… the beginning of our relationship thirty-six years ago. Ever since we’ve been together, we’ve loved to hike, camp, white-water river raft, snow ski—just about anything outside, show us how, and we’re game.

But with this adventurous spirit, he’s more the risk taker than I am. I’m the one in the back saying…. Honey, don’t get too close to the cliff, Honey, it says “No Swimming Due to Undertow,” … Honey, the sign says ‘Keep Out’, maybe we shouldn’t go in there, Honey, there are sharks in the water—and I have to admit, over the last thirty years, it has mostly worked in his favor, with just a small collection of scrapes and bruises.

Well not this time.

Being vaccinated, and the mask mandate lifted for outdoors, we were excited for some normalcy, so naturally, our first adventure was to Yosemite National Park. This beautiful forest with its ancient sequoia trees, and majestic water falls, is not far from the house, but because of its breath-taking magnificence, it feels like a world away.

As we hiked the trail up the mountain, several times he would exit the trail and stand close to the cliff to take pictures. At one point, I looked down at his tennis shoes, and he was standing on a slope covered with leaves. Yes, my heart stopped! I just knew he would slip, and off the cliff he would go. (And thus, the reason I always carry the car keys, ensuring I had a way to get home!)

Not another twenty steps later, he saw another ‘must have’ picture. Before I knew it, he was climbing up the side of a twenty-foot boulder, camera in hand.

Sometimes, I’d rather turn my head and not watch, than to see the last seconds of his life before he goes over a cliff. It’s that’s scary for me. This was one of those times, but after a few minutes, long enough that he could have gotten his shot and climbed back down, I turned around in hopes of seeing him hiking up the trail towards me…. But no. What I saw was him falling off the boulder onto the trail, and landing on his butt.

The ‘man’ that he is, he quickly jumped up, and wiped the dirt off the seat of his pants. Relieved that he wasn’t hurt, we continued the hike.

Well, the next morning, after a trip to Urgent Care, he found out that he’d broken his left tibia, and may have possible ligament tears, and his right ankle was severely sprained. The man who doesn’t often take long vacations, now has a doctor’s note for a six-week vacation and a beautiful set of crutches.

It’s not so ironic that our marriage, and Gideon’s and Isaiah’s lives from my latest release, Gideon’s Wish, have so many similarities in them. In every book I write, some of my personal experiences, emotions, fears, and triumphs can be seen through the eyes of the characters. Growing up in the outdoors, Gideon, like my husband, is for sure the more adventures of the two. But like in any healthy relationship, there’s that balance that a couple finds that just makes their relationship click, a chemistry. I use to tell my husband, I’d follow him anywhere, and for thirty-six years, I guess I’ve done just that, despite my fears of what he may get us into. I loved that in Gideon’s Wish, as much as Gideon and Isaiah tried to ignore the chemistry they felt for the other, in the end, there was no denying it.

“The emotions of the characters are almost tangible, like it is you that is in their situations. You cannot help to fall in love with them both and really root for them throughout their journey.”

I imagine many will say that Gideon’s and Isaiah’s story is our story….And maybe it is. 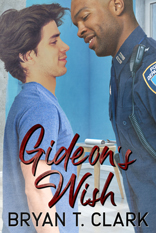 He might be Mr. Right, but their timing is all kinds of wrong…

Gideon Miller is done letting his heart do the thinking for him. Been there, done that, still has the emotional scars to prove it. Besides, he’s leaving Los Angeles soon. There’d be no point in starting up a new romance now. But when he meets the off-the-charts sexy, ex-military man next door, Gideon starts to question everything…

Why I Wrote Far Away

As an author, I often get asked why I wrote a particular book or where a specific character came from. I love that question because it is fascinating how I pull the different aspects of my life in creating a novel.

In my latest novel, Far Away, the story is so much a part of my own life that there is only a fine line between fiction and reality within the pages.

The story opens on the shores of Lake Winnipesaukee, New Hampshire. In the book it’s where the two main characters meet for the first time as teenagers. The lakefront grand home belongs to the character Noah’s, grandmother. This particular summer, is where it feels like life is just beginning for Noah, but for the visiting Spiro, it very much feels like the end.

In my own life, the characters Noah and Spiro, are bits and pieces of me during my own childhood, split into two characters. I have fond childhood memories of spending the summer with my grandmother on the shores of Lake Winnipesaukee. My brother Kenny, and I would visit her during the summer without our parents. Although Kenny and I weren’t twins like Noah and Nathanael, we were extremely close.

The original draft of Far Away was called the Visitor. It was originally a short story, and the entire story took place on Lake Winnipesaukee. In the end, Noah and Spiro were split apart by their parents. I never published that story because it didn’t have a happily ever after (HEA).

As young adults, my husband and I took a long vacation to Greece. On the tiny island of Santorini, I remember falling deeper in love with my husband. I knew I loved him when we left the States, but there was something magical that happened between us during those weeks on the island. When we returned, I crafted a short story surrounding our Greece trip.

In writing Far Away, the challenge was how to combine those two stories, that wouldn’t work for my romance audience, into a love story they would enjoy reading. In doing so, I also wanted to stay true to who the characters were, so blending four characters into two was challenging.

In Far Away, Noah is a very complex individual, fighting some dark demons. He is also this amazingly bright and gifted person that the world just doesn’t know what to do with. The scene where Noah returns home, after being kicked into a mud puddle by a bully, and tells his brother what happens, is not entirely all fiction.  In reality, this is me, sharing a moment with you of my early life and my relationship with Conrad, my big brother. Conrad, may you rest in peace and know that I am forever grateful that you were always my ally.

Just like my brother’s love, I cherish your support and always glad to call you my friend. So, until next time, please stay safe my friends.

If you enjoyed this post, make sure you sign up for the newsletter, and never miss another blog again.

Yes, I’ve been missing in action in your mailbox. I know, I know, I know. I’ll try and do better in 2021. Like me, many of you can’t wait for next year. This has been a year full of surprises, ups and downs, and challenges all around. You are not alone if you are feeling lost in a desert of fear and anxiety, are out of work, or quarantining from family and friends this season. 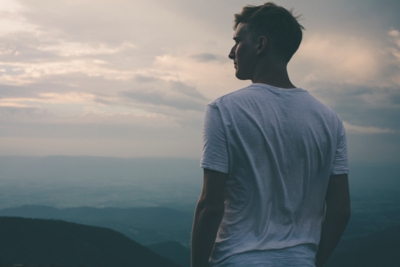 You Reap What You Sow

It’s been two months since my last blog and I apologize for not staying in better touch. I have to be honest and say, since March 18, 2020, my life as I once knew it, seems to have been forever changed. This is the day I went into quarantine in an attempt to escape this current pandemic. 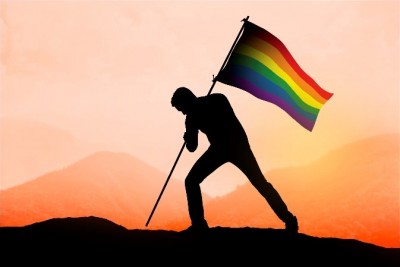 About the only thing familiar about this June is the hot weather that has been ushered in these past few days. In a month that is usually packed with Pride events every weekend around the world, just about all of the parades and parties have been canceled for this year for safety reasons due to the Coronavirus. Without a doubt, there is no way of social distancing yourself at an event with thousands of people around you. 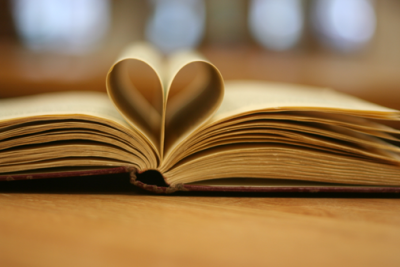 There is Light at the End of the Tunnel

As the saying goes, “April showers, bring May flowers.” This has never been as true as it is this spring. With a ‘Shelter in Place’ order implemented around most of the world and the social distancing mandate due to the Coronavirus/Covid-19 pandemic, March and April may have been pretty dark months for some. Let’s hope for the flowers in May! 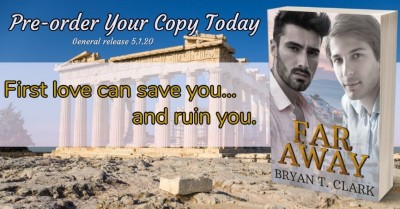 From the multi-published Rainbow Award-winning author and a Lambda Literary and International Book Award Finalist, Bryan T. Clark comes the most anticipated book of the year! 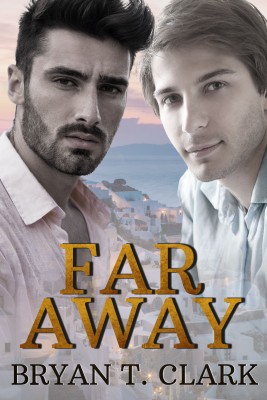 My new book, FAR AWAY, is finished and set for release on May 1st. Here’s a sneak peek at the cover for my newsletter readers ONLY.

I am absolutely positive you’re going to love this book! The story is of two boys, one summer, and a love so grand that, in their adulthood, neither can forget the day they met. An imprint made so strong on their hearts that, even with all that life threw at them, it kept their love alive.

As James A. Baldwin once said:

“Love does not begin and end the way we seem to think it does. Love is a battle, love is a war, love is growing up.”

Once upon a time, I was a huge fan of Valentine’s Day. Some thirty plus years ago, when my husband and I first dated, we were just two young boys sitting on a rock along a river bank. I knew so little about love: the depths in which one can love, the complications of love, the power of love.