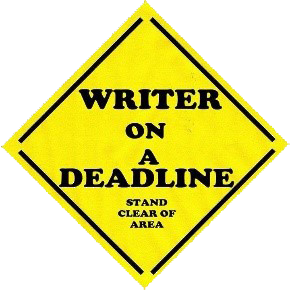 One morning I took a few minutes to read a comment someone posted in one of my writer’s groups on FB. In part, they were asking how long, and how many books, does it take before they could quit their day job and support their family as an author. At last count, there were over fifty responses to the question from many authors who were actually qualified to answer the question.

What I read from the many who responded was that it took writing two to three books a year, for several years before they were successful in terms of making money. I also noticed that several of those authors now have 20, 30, and even 40 books published.

DAMN, I could live 250 years and never write that many books! I knew I was a slow writer, but come on now. I thought I would be doing well if I could keep the pace of a new book every 12 to 16 months.

Initially, this post sent me over the edge, forcing me to take a look at my end goal. Was the purpose to write or to publish? Am I writing for me or for you? Just what the heck am I doing and why? Three years ago when I decided to get serious about my writing it came out of the sheer enjoyment of writing a story. I had fun creating characters in a fictitious world that mimic’s the world we live in. For me, it was the same as going into the changing room at a department store and trying on outfit after outfit and loving them all. Of course, you can’t have them all so you start mixing and matching to pull out the best pieces that would give you the most creativity from the few pieces that you are taking home with you. I found that I can not only do this with the characters, but the land in which the characters live in as well. I could put the city of San Francisco anywhere in the world.

So after publishing my first novel back in 2014, I learned that people wanted more. The question most readers ask themselves after discovering a new author is, “what else do they have, I want to read another!”

Well I didn’t have another to give you so guess what? I found my audience moving on, to find their next book. Well since you liked my first book, Ancient House of Cards, why not give you another and then another?

At the time, I was working full-time winding down my first career. I knew I was getting ready to retire and up to that point, I really had no idea what I was going to do after retirement to stay busy. After much thinking, I enthusiastically decided that I would write, publish books, and keep the old mind engaged. It was never about making money, becoming famous or establishing myself in the literary world; it was simply to keep busy.

I got to know other authors and the writing community, I found that over time within me was a growing sense of panic, that I should be keeping up with the Jones’, writing faster, and trying to publish more frequently than the planned every 12 to 16 months.

If I’m going to be honest, I found myself a little depressed, reevaluating if writing/publishing was something I still wanted to do. I can’t write three books a year nor do I want to. Those authors that do, I believe are gifted, polished in the profession. Me—I’m retired, and new to the writing industry. What I want, is to have fun, bringing entertainment to you in the form of books. Saying that does make me feel a little guilty, and less of an author, that somehow I’m not serious about this. But I am; I am very serious about delivering a quality product to my readers, one worthy of being published and bought.

Realizing this and saying it aloud helps me to focus on the goal at hand, and that is to just write. Stop worrying about what other authors are doing or not doing, I don’t have to keep pace with them. I love what I’m doing, and that’s writing from the heart. Although it’s fiction, my stories are very personal, developed from my past and how I see the world today. I have plans for many books in the coming years, stories that I can’t wait to deliver to you. This is a journey for me, an exciting time in life that I get to share with you. Now that makes me happy.