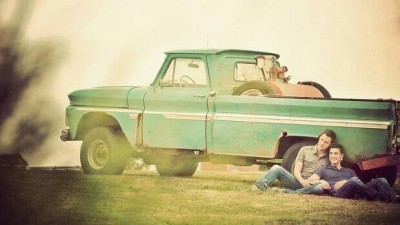 It’s About the Journey

Last month my husband Brian (Yes, his name is Brian also) and I celebrated our thirty-five-year anniversary. I truly can’t believe we’ve been together for thirty-five years! It seems as if it was just yesterday that we were teenagers, sitting on a rock by the river, getting to know one another.

It was the end of the summer, the year was 1984, and I had been secretly lusting over Brian all summer. At the time, I was openly gay, however Brian was a devout Christian and didn’t even know Gay was an acceptable possibility. He was curious and questioning his sexuality as he began hanging out with my group of colorful friends. Our summer social activity was to park along the riverbank at night and party. In the cool California air, for hours we laughed, drank, and played Truth or Dare, until like clockwork, at two a.m., the local sheriff drove out and cleared all the cars away.

The night of September 8, 1984, Brian and I had separated from the crowd and had wandered over to the rocks on the river’s edge. After hours of talking, I finally worked up the nerve to confess my feelings to him. He admitted he had the same feelings, but was unsure about if it was right to act on. That night, I asked him to take a chance, to take a leap of faith, to trust me I promised not to hurt him. He accepted what I asked of him, and that night, we had our first kiss.

For years, we debated whether our official anniversary would be September 8th, or since the clock had struck midnight, and ‘our date’ continued, would the date actually be September 9th.

Twenty-four years later, and after a ruling by the Supreme Court of California, affirming Marriage Equality, on September 9, 2009, while standing before God, our family, and our friends, we were legally married and made the 9th our official anniversary date.

When I first decided to write this month’s blog, I was thinking about how much has changed since that summer in 1984. I would have never foreseen that after a twenty-seven-year career in law enforcement, I would be writing romance novels about gay men.

Every day, I sit down at my computer and get to craft stories about the lives of people, fictional characters that will enter bookstores, libraries, and homes around the world. Although all of my characters are vastly different from one another, they each contain bits of my and my husband’s story within their character.

In Ancient House of Cards, it was our struggle with religion and our relationship with God that was an issue. Sad to say, but the ‘church’ failed Brian and I early on in life, and much of the pain we felt has been irreversible. Before Sunrise is a reflection of the demons within us, and our struggle to keep a lid on them. Life is hard and at times doesn’t seem fair, but you must continue to swim or you will drown. Come to the Oaks echoes our innocence, our belief that our love could transcend all obstacles.

Diego’s Secret is about trusting our hearts even if it meant losing your family. Brian’s family had a very hard time with him ‘Coming Out’ in the beginning. Their love for their son never wavered, and over time their relationship has healed and flourished.

I poured my heart into Escaping Camp Roosevelt. So much of that book were pages from my life. The feeling that you’re not good enough, failure, disappointment and trust, are all things I have struggled with, and to some degree, continue to struggle with.

So, as in life, my characters have to ask themselves, “Is love worth the risk?”. To know that in coming out, they could lose everything and that by choosing love, there is a real chance they could get hurt, have their hearts broken, and still be willing to take the risk. Is this not what we all may have to ask ourselves in this one life that we get?

Romance is about the heart fluttering and the feeling that you just might die if you have to spend a single moment away from the person you love. Now, I am not talking about the mushy stuff our mothers may have read, but real relationship issues, dealing with a moral dilemma that is often surrounded by dishonesty, hurt, risk, and most importantly, real love that makes the struggle worth it all in the end.

Writing romance is so much more than rescuing the damsel in distress, or a cheesy love scene. It is about life, and what we all want… to be loved and to be in love.