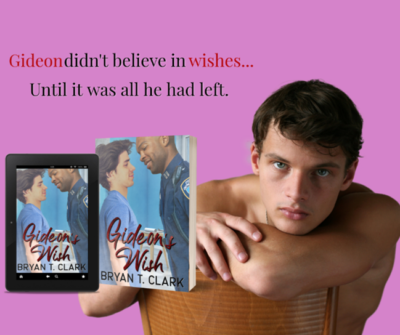 Why I Wrote Gideon’s Wish

In the literary world, the question authors are often asked is “Why did you write the book?” I personally love that question because the answer that most authors give is that the story was somehow personal to them—that they themselves connected with the story or characters in a way that drew them to write the story. I regularly tell people that I don’t choose the story, but that the characters chose me to tell their stories. Once I relinquish the creative power to the characters, the stories seem to write themselves; Gideon’s Wish is such a book.

Gideon’s Wish features two different characters, each one fascinating in his own way. Gideon is an openly charismatic gay handyman, and Isaiah is the not-so-openly gay alpha male. Initially, Gideon was a main character in another of my works in progress. In that manuscript, he wasn’t HIV-positive. As I worked on that manuscript, Gideon revealed to me that he was HIV-positive. The story line evolved over time and morphed into something completely different than what I initially thought I was writing about.

At first, I struggled with incorporating this point into the storyline because, as a gay man, I lived through the AIDS pandemic in the ’80s and ’90s. That was a difficult and dark time within the LGBTQ+ community. I lost many friends to the virus, witnessed bigotry, and heard of marginalized health care and inequity from our government. During those years, every movie made and every book published ended with the death of the character with HIV. I just didn’t want to write that story.

In the romance genre, a happily-ever-after (also known as HEA) is essential to the plot and ending. Without an HEA, you don’t have a romance. For many years, stories involving HIV-positive characters didn’t deliver an HEA. After carefully listening to Gideon, I knew his story had an HEA ending, and that this was his story I was telling. Gideon needed his own book, so I shelved that work in progress and wrote Gideon’s Wish.

Gideon’s character was not the only character who spoke so clearly to me. Isaiah, the second main character in the book, is a lot like myself. This familiarity may be the reason his story was emotionally a little harder for me to write. Isaiah is examining what it means to be a gay African American in this world and struggling with a sense of belonging. Even in his immediate family, who should be his support team, some family members are not willing to accept who he is. On the surface, Isaiah is a strong man, a solid guy; but as you get closer to him, you’ll witness his trust issues, formed by a world that tells him constantly that he isn’t good enough because of his skin color combined with his sexual orientation. Isaiah is a lot like myself. I didn’t intend for so much of me to come out in him, but this character was who spoke.

As a gay African American male in my fifties, it seems that I have been confronting racism and bigotry all my life. Like Isaiah, in my earlier years, being gay was an issue in my church, the athletic teams I was a part of, with my dad, my career, and many of my early friends.

One of the hardest realities as a young adult was acknowledging that the color of my skin mattered even in the LGBTQ+ community—a community that said they were inclusive and fighting for equality.

Once I fully understood the story I was telling, I had a goal in mind. As always, my main goal is first to entertain the reader. But with Gideon and Isaiah, I wanted to ensure that their story reflected real life—that while an HIV diagnosis may be a part of someone’s story, it no longer defines their story, however, racism is still very much alive and thriving. I feel this book is a timely reflection of this.

The hard part in writing Gideon’s Wish was that my understanding that what I knew and believed about HIV is not today’s reality. I had to find people who were HIV positive and who were willing to share their experiences with me. I interviewed them to understand what it meant to live with an HIV-positive diagnosis today. My friend Dean, the Program Director of HIV Services, at The Source LGBT+ Center was especially valuable because he served as my Sensitivity Reader for the project, ensuring that I was not only knowledgeable on the matter, but was also sensitive to those living with HIV.

Because the book is very much about emotions and feelings, from both main characters, I sometimes struggled with Gideon’s feelings. He is a young adult and, at times, he did not even know what he was feeling or why. I had to take a moment and examine what he was telling me, because it was often told from a naïve point of view. I needed Gideon to grow, to be successful in his arc in the book, and he did just that.

In the end, I think I met my goal, and I believe you will fall in love with Gideon and Isaiah just as I have.

If you enjoyed this post, be sure to sign up for the newsletter, and never miss another blog post again. Also, be sure to check out my Facebook Official Fan Page, The Reader’s Lounge.