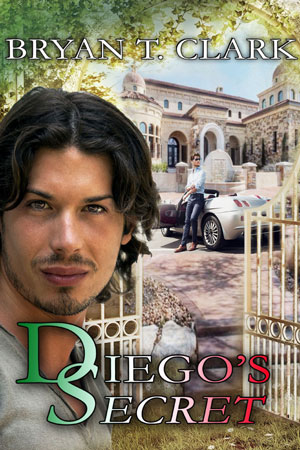 Hip-hip hooray! Today is the official release day for my fourth novel, Diego’s Secret. I can’t believe it has been twelve months in the making and that it is finally here! If you love stories about family dynamics, you will love this book!

Last month, I gave members of my Readers Lounge the first three chapters of Diego’s Secret for free. This month, as a member, you will now get the first scene in chapter four for free as well.

I love this scene in the book because it reveals so much about who Diego is; important, personal and defining details that disclose more about what Diego values. For Diego, and for many of us, these defining details reflect who we are as adults and what is most important to us in our lives. In this scene, you learn that Family is everything, and for Diego, familia is all that he has.

I’ll keep my chattering short as I know you want to get to reading. Enjoy!

Chapter Four/Scene One
Sitting at the table, Diego listened as Rafael and a shirtless Francisco argued over whose responsibility it was to put gas in the car. As always, when Rafael had returned the car that he and Francisco shared, the tank was empty. The three of them fought all the time about money.

Mayra, Francisco’s girlfriend of three years, finally called a truce. “Okay, enough!” At just over five feet, she was a pistol and could handle all three of them. She had cooked dinner for the boys this evening, though she didn’t officially live there. “You two fight like dogs and cats. Always . . . every night, you fight.”

Francisco rubbed his bald, shiny head as he shot her a mind-your-own-business expression, a look she never heeded. Diego sat quietly, rushing to finish his dinner so he could retreat to his room. He used the last of a flour tortilla to mop up the remainder of his beans. He had about five minutes before Francisco and Mayra would start fighting.

Diego knew that neither of his brothers had room to talk about how the other spent his money. Rafael pissed it away like it grew on trees; Francisco had thousands of dollars in tattoos that covered his back and arms, and now he was having a piece done on his ribcage. Suddenly, Diego could not stop himself from jumping into their argument. He lashed out at Rafael. “Why don’t you put gas in the car? You’re being stupid!”

Diego had known that calling Rafael stupid would send him over the edge. Since the day their parents had put them on the bus for the three-day trip to the border, where the coyotes waited for them, the three brothers had fought like gladiators and yet had been each other’s best friends.

When they had left Mexico, Francisco had been twenty; Rafael, eighteen; and Diego had just celebrated his seventeenth birthday. Old enough to take care of each other, they were in the hands of complete strangers and heading to the United States to live with their father’s brother and his wife.

When they had arrived, Diego’s uncle hadn’t thought it was safe to register him or Rafael in public school. Instead, Francisco and Rafael worked with their uncle doing construction, and Diego went to work in the fields. Eight months after arriving, their uncle dropped dead of a heart attack. His wife had returned to Mexico, leaving the boys on their own. Shortly after this, Francisco had started Castillo Lawn Care with the help of his brothers.

Grabbing a tortilla from the middle of the table, Diego excused himself and fled to his bedroom to work on his drawings. Since Rafael worked in the evenings, he would leave soon, giving Diego the bedroom all to himself. For hours, Diego would sit and create lavish landscape designs on his sketchpad. With a stroke of a pencil, he had all the materials he wanted, whether they were rocks, ponds, or fountains. Self-taught, he dreamed of the day that his sketches would become real.

He hadn’t been in the room but a couple of minutes when Rafael walked in to grab his shoes for work. “Can you give me a ride? Francisco says I can’t take the car tonight.” He plopped his long, skinny body down on his bed as he fished for his shoes underneath.

“Why?” Diego eyed his sketch as he put down his pencil.

“I have a date after work. He’s worried I won’t bring the car back before morning.” Rafael’s voice was agitated.
Diego didn’t say anything. It was Rafael’s own fault. How many times had they been forced to hunt him down in the morning so Francisco could drive the car to the shop? How many times had the entire house been in turmoil because of Rafael’s selfishness?

“I’ll be ready in five minutes.” Rafael grabbed his toothbrush from his nightstand and headed to the bathroom.

Diego blew out a large breath. Exhausted, all he wanted to do was relax and draw. Picking the pencil up, he continued sketching out a large gazebo surrounded by water. He could at least finish the gazebo before his brother was ready to leave.

When Rafael reentered, his wet hair was pulled back into a tiny ponytail. Diego immediately caught a strong whiff of the knockoff Polo Red that Rafael bought at the flea market and that he chose to bathe in instead of taking a shower.

“Ready?” Rafael asked as he stood at the door, staring at Diego.

“Yeah.” Diego pulled his tired body off his bed.

When they passed the front room, Francisco was on the couch watching the basketball game as Mayra cleaned the kitchen. Diego grabbed the keys to the car and, without saying a word, followed Rafael out the door.

“Who are you going out with tonight?” Diego’s eyes dropped to the gas gage. The car was empty again. Are you shitting me? “Do you have any money for gas? We need gas.” Diego tried to control his anger.

“No. That’s what I was trying to tell Francisco. Put ten dollars in it, and I’ll pay you back in the morning from my tips tonight.”

If Diego wasn’t putting gas in the truck, he was putting it in the car. He had forty dollars in his wallet and that was supposed to last him all week. If Rafael didn’t pay him back in the morning, the rest of the week would be tight. Dipping into his hidden savings was not an option; he needed that money for his new truck. “So, who are you going out with tonight?” Diego pried. Was it the white girl Rafael worked with? He knew they were sleeping together. At least, they had been a month ago.

“You don’t know her. She comes in the shop almost every night for a sugar-free vanilla latte. Her name is Kimmy. Hot little redhead.” Rafael gave him a dirty grin. “You want me to ask if she has a sister?”

Rafael was messing with him again. Diego rolled his eyes. “No. I’m good. I’d rather not hang out with you any more than I have to.” Rafael’s question hadn’t required an answer. This was what he did: pushed Diego’s buttons for no particular reason.

“That’s right. You like to do your shit in private—not let anyone know what you’re up to. Where do you go? A hotel, rent a room by the hour?” Rafael poked at his side, causing him to slide closer to the door. “Maybe a prostitute? Is that what you like, fucking a prostitute?” Laughing, Rafael let out a moan, mimicking the sounds of someone making love.

Diego’s grip tightened on the steering wheel. The jokes, the prying for information on who he was sleeping with. The truth was, Diego was a virgin. He had never had the same interest in girls as his brothers.

He used to think that he just wasn’t ready yet. Then, at the funeral of one of his uncles, an older guy who had been staring at him motioned Diego to follow him into the church’s bathroom.

Nervously, Diego had followed the stranger into the stall, where the man had sucked him off. That fifteen-minute encounter was better than any hand job he had ever given himself, and it opened a new world of possibilities. Fascinated by the idea that it could happen again, Diego had given little concern to the consequences of being caught.

After that day, he had paid careful attention to who was watching him, and lo and behold, they were all around him. At eighteen years old, he could walk into any crowded place and find someone who gave him that same do-you-see-me look. The stare that was too long to mean anything else. That someone was always a man. Women never ventured into his playing field; it was a man’s game.

Now, eight years later, his sexual excursions occurred about once every two months or so.

After a fifteen-minute drive, Diego and Rafael arrived at the Grind. “I’ll call you if I need a ride.”

“Bullshit. I’m going to bed. Catch the bus.” Diego’s tone was clear. “Are you coming home before class in the morning?”

Shutting the door, Rafael leaned the top half of his slender body into the open window. “Can you give me a ride to class?”

Earlier that day, for a split second, he had thought that Mr. Makena was giving him the stare when they had met in the back yard. With his steel-grey eyes and that hair, he was even more attractive than Mr. Legs.

Mr. Leblanc and Mr. Makena lived in a different world than Diego. Rich people dated rich people. Mr. Makena, it turned out, didn’t even remember that he and Diego had met before. It was foolish to keep thinking about it. He had heard Francisco tell Rafael a thousand times, A dog never shits where it eats.

Diego lingered until Rafael disappeared into the crowded shop. Checking his side mirror, he waited for an opening to merge back in with traffic. Mr. Makena was now stuck in his head, arrogant and unattainable….

To order the full book and finish reading, click the button below, and thank you, Mi Familia, for your support: